Home Plate: Worth a second visit?

In Gusev Crater’s Columbia Hills, explored by the Mars Exploration Rover Spirit, a low plateau about 100 yards wide dubbed Home Plate has turned out to be a Pretty Big Deal. Although a deep bed of soft sand on its edge has trapped Spirit’s wandering wheels for good, Home Plate’s other aspects are the most important. 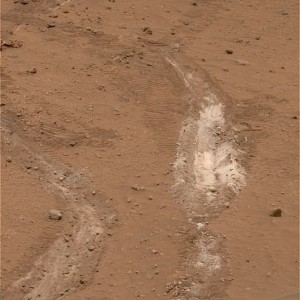 In 2008, an accidental discovery of silica at Home Plate made news because the mineral most likely formed by a hot spring or a geyser like those in Yellowstone National Park, or perhaps by fumaroles (steam vents) like those in Hawaii.

Hot springs have great benefits for scientists looking for signs of life. Despite the often harsh conditions within them, hot springs can act as incubators for microorganisms. And even after the heat turns off, an ancient hot spring will preserve biosignatures, the hallmark traces left by any organisms that existed there.

A team of scientists led by Steven Ruff (Arizona State University) now provides a comprehensive report on the rocks and deposits around Home Plate in the Journal of Geophysical Research. They show that the silica deposits are more likely to come from hot springs than from fumaroles. The silica occurs in eroded outcrops that cover large areas around Home Plate, indicating a persistent source of abundant, silica-rich hot water. This geologic environment suggests that the atmosphere of Mars back then was warmer and denser than the current cold and dry conditions.

Spirit was not equipped to detect signs of life at Home Plate. And while NASA’s next Mars rover, Curiosity, is equipped to look for organic matter, it will go to one of four sites that all lie elsewhere on Mars. But the authors conclude that Spirit’s resting place definitely merits a revisit: “The remarkable diversity of igneous rocks throughout the Columbia Hills makes a strong case for future sample return from Gusev crater.”