Mars meteorite altered by water, has spherules enriched in carbon

A team of scientists at NASA’s Johnson Space Center in Houston and the Jet Propulsion Laboratory in Pasadena, Calif., has found evidence of past water movement throughout a Martian meteorite [Yamato 000593], reviving debate in the scientific community over life on Mars…. [snip] 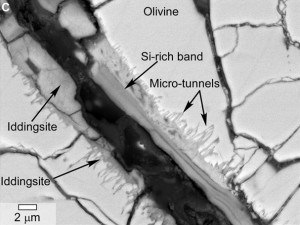 This scanning electron microscope image of a polished thin section of a meteorite from Mars shows tunnels and curved microtunnels. The clay mineral iddingsite is present in this meteorite, named Yamato 000593, which was found in Antarctica in 2000 and identified as originating from Mars. The scale bar at lower left is 2 microns. (NASA/JSC/JPL)

The team’s findings have been published in the February issue of the journal Astrobiology. The lead author, Lauren White, is based at the Jet Propulsion Laboratory. Co-authors are Gibson, Thomas-Keprta, Simon Clemett and McKay, all based at Johnson…. [snip]

Analyses found that the rock was formed about 1.3 billion years ago from a lava flow on Mars. Around 12 million years ago, an impact occurred on Mars which ejected the meteorite from the surface of Mars. The meteorite traveled through space until it fell in Antarctica about 50,000 years ago… [snip]

The second set of features consists of nanometer- to-micrometer-sized spherules that are sandwiched between layers within the rock and are distinct from carbonate and the underlying silicate layer. Similar spherical features have been previously seen in the Martian meteorite Nakhla that fell in 1911 in Egypt. Composition measurements of the Y000593 spherules show that they are significantly enriched in carbon compared to the nearby surrounding iddingsite layers… [snip]

The authors note that they cannot exclude the possibility that the carbon-rich regions in both sets of features may be the product of abiotic mechanisms: however, textural and compositional similarities to features in terrestrial samples, which have been interpreted as biogenic, imply the intriguing possibility that the Martian features were formed by biotic activity… [More at link]

This entry was posted in Reports and tagged astrobiology, Mars meteorites, Nakhla, Yamato 000593. Bookmark the permalink.