The rock outcrop dubbed Comanche in the Columbia Hills of Gusev Crater is unusually rich in magnesium-iron carbonate minerals. This discovery was first announced in 2010 using data from the Mars Exploration Rover Spirit. At the time, scientists thought that Comanche accumulated the minerals through being soaked in carbonate-rich water that came from a hydrothermal vent. 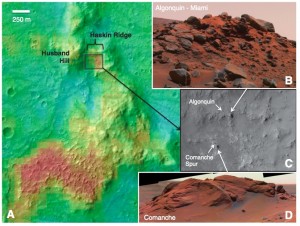 LAKE GUSEV RETURNS? Low temperature water from an intermittent lake may have washed carbonate minerals into the Comanche outcrop in the Columbia Hills of Gusev Crater. Previous work looked only to hydrothermal sources for the water. (Image taken from Figure 1 in the paper.)

Now, a new paper points instead to the possibility of an ancient lake in Gusev. The lake water may have produced the Comanche carbonates as it interacted with volcanic ash deposits that were once widespread in Gusev. The proposal comes from a team of scientists led by Steve Ruff (Arizona State University) and was published in the journal Geology.

The team says, “We now find evidence that the alteration of the Comanche outcrops is consistent with evaporative precipitation of low-temperature, near-surface solutions. These derived from limited water-rock interaction with rocks equivalent to nearby outcrops called Algonquin.”

They add that the Algonquin outcrops are remnants of volcanic tephra that once covered the Columbia Hills and the adjacent plains. This was well before basalt flows covered the floor of Gusev about 3.65 billion years ago.

Ironically, Mars scientists originally selected Gusev as a landing site because they expected Spirit to touch down directly on lakebed sediments. Gusev’s floor, however, turned out to be basaltic lava flows. Geologists concluded that any lakebed sediments must lie deeply buried — or they were extremely patchy in location.

The Ruff team explains, “The Columbia Hills are a kipuka, an island of older terrain surrounded by younger lava flows.” Additional kipukas to the south and west include comparable knob and ridge terrain that appears to be the oldest terrain type exposed in Gusev. “Comanche and Algonquin outcrops thus appear to represent outliers of a much larger unit that was emplaced and eroded.”

The team says, “We favor a scenario in which evaporation of an ephemeral lake, perhaps recharged by multiple floods, led to the occurrence and significant abundance of carbonates in Comanche.” But a big lake isn’t necessary: “The Columbia Hills are in the lowest portion of Gusev Crater, so a deep, crater-spanning lake need not be invoked.” They go on to say that if CO2-charged floodwaters in a subsurface aquifer passed though Algonquin-like rocks, that process could have had similar results as well.

In either case, they point out, “Low-temperature, mildly acidic solutions lend astrobiological significance and scientific merit to Gusev Crater as a candidate landing site for surface missions oriented toward the search for past life on Mars.”