The quest to find the youngest, most recent lava flows on Mars inevitably leads back to two highly volcanic regions: Elysium and especially Tharsis. A group of researchers led by Ernst Hauber (DLR, Berlin) has zeroed in on Tharsis. Ignoring the large volcanos, they investigated 83 low shield volcanos on the lava plains between the more lofty structures. 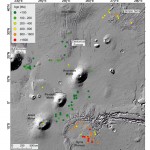 This image (figure 3 in the paper) shows the study area in Tharsis with the ages of shield volcanos coded by color; redder is older, greener is younger.

Counting craters down to 30 meters (100 feet) in diameter on images from the Context Camera (CTX) on NASA’s Mars Reconnaissance Orbiter, they applied standard models that relate the number of craters of a given size within a given area to the time that has passed since the lava flow erupted. They write in Geophysical Research Letters (May 17, 2011) that, “Extended areas in Tharsis have been resurfaced by lava flows in the last few tens of millions of years.”

The thickness of the flows is unknown, but they were thick enough to cover any large pre-existing craters in their path. Moreover, the flows’ characterisitics lead the team to conclude that the flows were basaltic in mineralogy and relatively low in viscosity. They conclude that, “Although searches for thermal signatures and surface changes within the last decade have not yielded any positive evidence for active volcanism, it appears possible that Mars is not yet volcanically extinct.”