Peeking into a stacked deck

No one is planning to send a Mars rover into the high latitudes (north or south) anytime soon, but if a paper in Icarus (June 2011) by Seth J. Kadish and James W. Head (both Brown University) is correct, scientists looking into Martian climate history might want to explore a landscape feature found only there: pedestal craters.

The “pedestals” are wide aprons that encircle many high-latitude impact craters and stand roughly 50 meters (160 feet) higher than their surroundings. A pedestal forms when debris ejected by the impact, plus the blast wave and heat pulse, harden the top of the original ground surface. (This surface, the end product of countless cyclical changes in climate, is thought by many scientists to be rich in layers of ice interleaved with dust like cards in a deck.) Then over hundreds of thousands and millions of years after the impact, continuing climatic change erodes the ground around the crater, except where the impact effects armored the surface. Pedestals therefore likely preserve records of bygone climate cycles.

Kadish and Head used images and data from the CRISM, CTX and HiRISE instruments on the Mars Reconnaissance Orbiter to examine pedestal craters lying poleward of latitude 60° north and south. They found 12 examples showing layers in the pedestal edges. Do these pedestals contain ice?

The results are inconclusive, the researchers note. One pedestal crater in the north showed small hints of exposed ice to the HiRISE camera. But most of the existing data from CRISM and ground-penetrating radar (SHARAD) is too coarse to positively identify ice in the edges of pedestals. The task of finding exposed ice is made more difficult because the ice can easily be mantled by only a thin coating of dust and debris trickling from layers above.

However, one southern pedestal crater they examined (see below) formed on the south polar deposits and appears to preserve the local sequence of ice and dust layers. “Future work,” the team says, “will focus on utilizing new CRISM and HiRISE data to identify water ice signatures along pedestal scarps.” 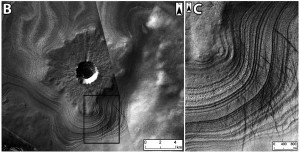 A CTX mosaic shows a pedestal crater on the south polar deposits that preserves local climate records in layers of of ice and dust. Note that the layers echo the curving outline of the pedestal surface. (Taken from Figure 4.)