The sky falls on Mars, too, just as it does sometimes on Earth. In its long crosscountry drive over the pool table expanse of Meridiani Planum, Mars Exploration Rover Opportunity has encountered more than a dozen meteorites, all of them iron or stony-iron in composition. 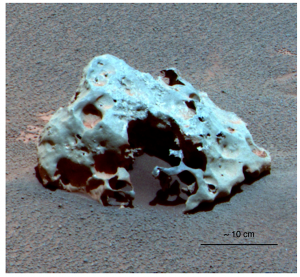 ALL HOLLOWS. Weathering has reduced the iron meteorite Mackinac Island (about a foot in diameter) to a filagreed shell, suggesting that the iron originally contained many sulfur impurities. These corroded and weathered away as climatic cycles repeatedly exposed the meteorite to acidic water or ice. (Figure 6b from the paper.)

Meteorites found on Mars are curiosities, but they can be something more than that, as a recent paper in the Journal of Geophysical Research points out. A team of scientists led by James Ashley (Arizona State University) notes that because we have samples on Earth of the same kinds of meteorites found there, scientists can use the weathering seen on the Martian examples to probe bygone Martian climates.

What’s most distinctive about these meteorites is that they show evidence for repeated episodes of weathering. For example, Block Island (an iron meteorite) shows two dramatically different faces: one smoothed, probably by sandblasting, and the other deeply pitted, probably by acidic corrosion. The corrosion likely occurred as thin films of water encountered iron sulfide minerals commonly found in iron meteorites.

Both Block Island and Shelter Island show evidence for multi-stage weathering. Close examination of their surfaces show that both have lost through weathering the fusion crusts that meteorites commonly develop as they speed through the atmosphere. Then exposure to water (or probably ice) created an oxydized (rusted) outer layer. This in turn has been largely scoured away by wind erosion.

There’s no way at present to determine how long those meteorites rested on the surface before Opportunity rolled by. But the weathering is unlikely to have happened recently, given Mars’ current arid, cold climate. Yet scientists know that over the last half million years at least, the planet’s spin axis has changed its tilt with respect to the Martian orbit. This has produced periods when snow and ice have come down from the polar regions and accumulated near the equator, probably including Meridiani Planum.

While the meteorite hunting has been good on the drive — it doesn’t take much for a rock to stand out on Meridiani’s barren plains — the harvest is likely to start winding down. Soon Opportunity will be at Spirit Point on the Cape York ridge, the closest section of Endeavour Crater’s rim. Once it arrives, Opportunity’s science mission will shift focus to studying the rocks and outcrops found there. While more meteorites will surely turn up, they are likely to be fewer in number than up to now.