Mars air has been cold, thin for 3.6 billion years

The atmosphere of Mars today, 95% carbon dioxide, is cold and thin, with less than 1% of Earth’s surface pressure. Yet long ago, it must have been dense enough to allow rivers and streams to flow in many areas of the planet. 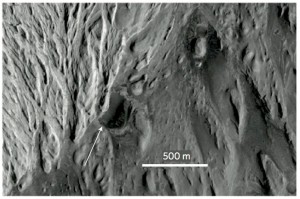 EMERGING. Erosion is exhuming a small crater (arrow) within Gale Crater’s mound. The number of small craters in the region nearby supports the idea of a thin, cold atmosphere on Mars 3.6 billion years ago or earlier. (Image taken from Figure 1 in the paper.)

Four scientists led by Edwin Kite (Princeton University) argue (in Nature) that the Martian atmosphere is been too thin for rivers for at least the past 3.6 billion years. They base their conclusions on the number of small craters they found in river and stream deposits in Aeolis Dorsa, a region roughly a thousand kilometers east of Gale Crater.

Craters help scientists probe ancient atmospheres, says Kite, because “the minimum size of craters serves as a proxy for the paleopressure of planetary atmospheres.” Thinner atmospheres, he explains, let smaller impacting objects to reach the surface at high velocities and form craters.

The team notes that Aeolis Dorsa is a promising location to hunt for ancient craters. “The stratigraphy,” they explain, “contains numerous channel-fill deposits of large rivers and, when these overlie a crater, that crater must be as ancient as the rivers.”

“We obtain an upper limit of 0.9 ±0.1 bar for the Martian atmospheric paleopressure,” says the team. (This is about 150 times the current value for Mars’ atmospheric pressure.) They found that the upper limit could have been as much as 1.9 bars, that is, about twice Earth’s current pressure.

However, even two bars of pressure may not enough to raise ancient Martian surface temperatures above freezing. “If the small-crater limit is representative of early Martian pressure,” says Kite, “it is difficult to envisage continuous stability of surface liquid water for the 10,000 to 100,000 years needed to allow water to cycle between deep aquifers and the surface.

The team acknowledges that transient warming by eruptions, impacts, or infrequent orbital conditions could unfreeze the surface and shallow subsurface. This would allow liquid water runoff and streams, but would not last long enough to unfreeze ground down to depths of a kilometer or so.

“If Mars did not have a stable multibar atmosphere at the time that the rivers were flowing — as suggested by our results — then a warm and wet CO2/H2O greenhouse is ruled out, and long-term average temperatures were most likely below freezing.”