Will Opportunity find dunes on the move?

Mars Exploration Rover Opportunity is driving toward the rim of Endeavour Crater on Meridiani Planum. Twenty-two kilometers (14 miles) wide, Endeavour is largely obliterated, with only about half its rim remaining as low hills rising above the plain. The crater’s generally smooth floor slopes down to the south, making a broad basin about 300 meters (1,000 ft) below the plains. In this low spot, dunes made of dark basaltic sand lie in domes, sheets, crescents (called barchans), and ridges that wander like pieces of yarn. 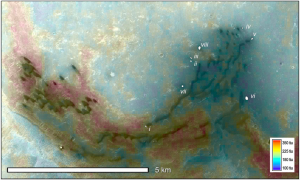 IT'S A BREEZE. Winds from the northwest sculpt dark sand dunes in Endeavour Crater. This false-color image combines a mosaic from the Context Camera (CTX) and nighttime temperatures from the Thermal Emission Imaging System (THEMIS). Cooler colors indicate smaller sand grains. The white areas with Roman numerals are dunes that changed shape between 2001 and 2009. (Figure 5 from the paper.)

According to a new paper in the Journal of Geophysical Research, Opportunity may see these dunes in action after it arrives at the rim in August 2011. The paper’s lead author is Matthew Chojnacki (University of Tennessee).

Using images taken from orbit between 2001 and 2009, the team found that some dunes migrated, two dunes shifted by 10 to 20 meters (33 to 66 ft), two other dunes disappeared entirely, and all the dunes appear to have lost sand to erosion by the wind. The conclusion seems clear: these dunes are active now.

The dunes’ shapes show that winds in the basin blow from the northwest, the direction from which Opportunity is approaching. Actual wind speeds are unknown, but by determining sand grain sizes (about half a millimeter and smaller), scientists estimate that wind velocities of around 3 meters per second (7 miles/hr) could get sand moving.

As it happens, however, by the time Opportunity can see directly into the basin, the season of strongest winds — southern spring into summer — will be coming to an end. But the timing won’t matter much because the rover will be studying rim deposits for many months to come, and any dune investigations would have to wait anyway.

Looking ahead, however, the authors say, “If Opportunity spends as much time at Endeavour Crater as it spent at Victoria Crater (more than one Mars year), the rover could detect the removal of additional dunes.” They add that if Opportunity remains healthy, “an attractive long-term drive target might be to the vicinity of these changing dunes.” That would let scientists see Mars sand dunes in action close-up for the first time.