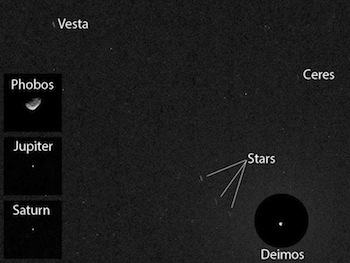 A new image from NASA’s Curiosity Mars rover is the first ever from the surface of Mars to show an asteroid, and it shows two: Ceres and Vesta. These two — the largest and third-largest bodies in the asteroid belt between Mars and Jupiter — are the destinations of NASA’s Dawn mission. Dawn orbited Vesta in 2011 and 2012, and is on its way to begin orbiting Ceres next year. Ceres is a dwarf planet, as well as an asteroid. Ceres and Vesta appear as short, faint streaks in a 12-second exposure taken by Curiosity’s Mast Camera (Mastcam) on April 20, 2014, PDT… [More at link]