A light-toned layer has been discovered exposed in the interior walls of numerous craters in the Chryse and Acidalia plains, according to a recent paper published in Geology by Mark Salvatore and Philip Christensen (both Arizona State University). The layer, say the scientists, is the result of widespread floods that poured onto the northern lowlands. 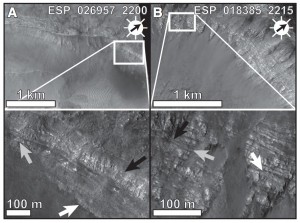 TELLTALE LAYERING. High-resolution images by the HiRISE camera reveal a widespread layer of light-tone material in craters across Chryse and Acidalia. This material appears to be the long-sought sedimentary deposit from the giant outflow channels that emptied onto the northern lowlands. (Image taken from Figure 2 in the paper.)

“Counting only where the layer is exposed,” says lead author Salvatore, “this unit has an observed extent greater than the area of Greenland.”

The massive networks of outflow channels in the Chryse area are some of the most prominent fluvial features on Mars, the scientists note. However, sedimentary deposits associated with these features have never been definitively identified because of subsequent geologic processes. These have buried any deposits with thick layers of dust mingled with wind-blown sediment, impact crater ejecta, and ice-rich mantling material.

The team used THEMIS data initially to look for exposed rocky layers in craters of one kilometer (about half a mile) or larger in size. To THEMIS, hardened rocky deposits show as warmer at night because such material loses heat less rapidly as night falls compared to surfaces that are coated with dustier materials. Some 415 craters had high-resolution orbital imaging (by MOC and HiRISE) that was detailed enough to use. Of these craters, 53% showed exposures of the light-toned stratigraphic unit.

“The unit appears relatively weak compared to typical Martian bedrock,” says Salvatore. Moreover, the unit varies in texture according to its distance from where the outflow channels emptied onto the plains. “Near where outflows entered, the deposits are blocky, but they become finer grained and smoother farther away from the outflow mouth.”

This is what would be expected, he says, if the outflow channels poured their deposits into a large body of standing water, whether open or ice-covered, or if the deposits formed as part of a large alluvial fan.

In any case, Salvatore explains, later processes likely buried the sediments, hiding them from view except where exposed by impacts. How much sediment was washed down? “At least a hundred meters [330 feet],” he replies.

The outflow deposits arrived after the northern lowlands were heavily cratered in ancient times and then flooded by countless lava flows. Following the deposition of the light-tone unit, the plains were buried yet again by dust, wind-borne sediment, ejecta, and ice-rich mantling deposits.

The light-tone layer poses intriguing questions, say Salvatore and Christensen: “Could these sedimentary deposits preserve evidence for ancient habitable environments?” On Earth, they note, areas with rapid burial by sediments are some of the best-known environments to preserve fossilized organic materials.

“If organic material was present near the source of the circum-Chryse outflow channels,” they conclude, “these deposits would be high-priority targets for future astrobiological studies.”