The cast and crew of scientists and engineers who designed, built, and operated the Mars rover Spirit for its 2,210 days in Gusev Crater held a commemoration and celebration for the rover at its birthplace, the Jet Propulsion Laboratory, on July 19, 2011. Speakers included NASA associate administrator Ed Weiler, rover project manager Pete Theisinger, rover scientist Steve Squyres, and many more rover scientists and engineers. 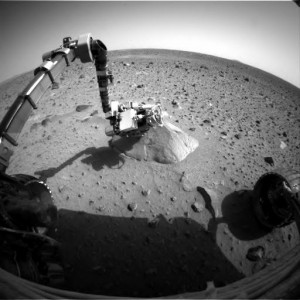 FAVORITE PICTURE: "Eighteen days into Spirit's mission, we appeared to have lost the vehicle," says Steve Squyres. "She just went silent. We didn't know what was going on — it was absolutely terrifying. It turned out to be a software problem, which was solved by brilliant analytical work by the team. This was the first picture that came down, on sol 25, after the problem was fixed. It showed us we had a healthy spacecraft ready to start exploring the surface of Mars." (NASA/JPL/Cornell image)

Showcased highlights of the mission include:

As rover engineers and scientists reminisce about the mission, you can peek over their shoulders to see how the project came together through “three and half years of terror and tension,” as Squyres describes it, followed by six years of highly successful operations on Mars. (Not bad for a 90-day mission.)

You also hear how potentially showstopping problems were solved, like using jigsaw-puzzle techniques to get enough cells onto the solar panels to provide adequate power. Without these the instruments would have been perpetually starved for juice.

And then there was the time a small metal washer was accidently dropped into the intricately folded airbags used to land the rover safely. That tiny washer had to be retrieved — and the key to finding it was dropping five more washers in the same place….