Mars in the Mojave?

Where do you go to order up some Mars on Earth? Several places, actually, such as the Atacama Desert in Peru (which is very dry), the Dry Valleys of Antarctica (dry and cold), and Houghton Island in Canada’s high arctic (cold). 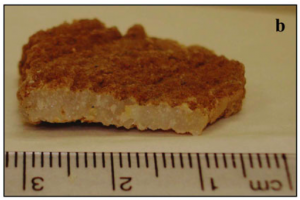 UPPER CRUST. A coating of the common rust mineral hematite effectively covers underlying carbonate rock in a sample from the Mojave Desert in California. A similar process may be hiding carbonate rocks from scientists on Mars. (Image taken from figure 3 in the paper.)

According to a paper published in the International Journal of Astrobiology, Bishop and her colleagues argue that traces of water and carbonate minerals could lie beneath the surficial iron oxide (rust) that covers rocks on Mars. This, they say, would be similar to desert varnish found on carbonate rocks in terrestrial deserts, especially the Mojave.

“The plausibility of life on Mars depends on whether liquid water dotted its landscape for thousands or millions of years,” says Bishop. “It’s possible that an important clue, the presence of carbonate minerals, has largely escaped the notice of investigators trying to learn if liquid water once pooled on the Red Planet.”

Individual small exposures of carbonate minerals have been found on Mars, but perhaps they aren’t so much rare as well concealed, the scientists say.

Members of the team explored an area in the Mojave called Little Red Hill, which receives about 10 centimeters (4 inches) of rain a year. After the field scientists collected carbonate rocks coated with iron oxides and aluminum-rich clays, the scientists back in the lab found that the surface layer largely masked the spectral fingerprints of carbonate minerals from remote-sensing instruments.

They write, “Our study of iron-rich coatings on carbonate rocks from the Mojave Desert indicates that rock coatings contribute to the challenge of detecting carbonates from orbit.”

Also, on some terrestrial rocks, the team found blue-green algae under the surface varnish, where it was protected from dehydration. If a similar process operated on Mars, it could have extended the time Mars was habitable. Moreover, the coating protects terrestrial microorganisms by shielding them from ultraviolet light – and the same effect could operate on Mars with any hypothetical Martian microorganisms.