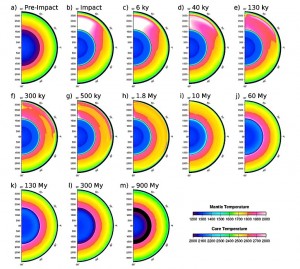 BIG IMPACTS HAVE DEEP EFFECTS as they deposit loads of heat into a planet. In the case of Mars, this disturbs the normal convection activity of the mantle and core. The result of a big impact is that the dynamo which creates the magnetic field does not become fully active until roughly a billion years later. (Image taken from Figure 3 in the paper.)

Several giant impact basins on Mars have ages that suggest they formed at about the same time that the planet’s global magnetic field disappeared. Is it coincidence or is there a connection?

While not claiming a direct causal connection, geophysicists James Roberts (Johns Hopkins University) and Jafar Arkani-Hamed (University of Toronto) write in the Journal of Geophysical Research that their computer modeling suggests that big impacts shut down convective movements of molten material in the Martian core.

Stopping convection in the core, they explain, turns off the planet’s internal dynamo, which generates the magnetic field.

Their modeling found that the impacts that formed the big basins delivered a large amount of heat to the Martian interior. This altered convection in the planet’s mantle and suppressed the normal convective activity that cools the Martian core. This, they argue, potentially forced dynamo activity to a halt, at least temporarily.

“We find that heating by a large impact generates a strong hemispheric upwelling in the mantle, which quickly spreads into a warm layer” under the planet’s surface.

The impact heating of the core leads to spherically symmetric stratification of the core, and its outermost layers are strongly heated. Roberts and Arkani-Hamed report that this acts as a thermal blanket that prevents the interior from cooling.

Because the impact heating falls off with depth, the outermost layers of the core are the warmest and most buoyant, while the inner core is relatively cool and dense. The core is thus stable and stops convection, without which the dynamo activity cannot be sustained.

After the heat from the thermal blanket diffuses into the mantle, convection resumes in a thin layer at the top of the core. As the core continues to cool, the convecting layer expands downward. After 100 million years the convecting layer is finally thick enough to restart the magnetic field dynamo.

But they note that, “The core does not return to a fully convective state for about a billion years after a big impact.”