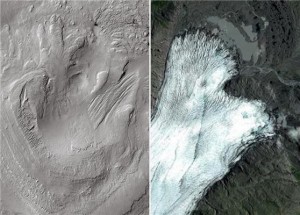 Left: Linear and lobate shapes on the highest reaches of Mount Sharp are interpreted as being shaped by glacial activity in the past. Right: Breiðamerkurjökull glacier, Iceland, a terrestrial analog of the glacial remains identified on Gale. ( CTX-MRO-NASA/Google maps)

Gale Crater was once home to glaciers and other features of an icy hydrological system, says a team of scientists led by Alberto Fairén (Centro de Astrobiología in Spain and Cornell University).

They base their work on images captured with the HiRISE and CTX cameras on NASA’s Mars Reconnaissance Orbiter, together with the HRSC instrument onboard the European Space Agency’s Mars Express orbiter. The team’s report was published in the journal Planetary and Space Science.

“Gale was covered by glaciers approximately 3.5 billion years ago,” says Fairén. “They were particularly extensive on its central mound.” The mound, officially named Aeolis Mons and informally dubbed Mount Sharp, rises 5 kilometers (3 miles) above the crater floor where the Curiosity rover is exploring.

Ancient Mars held large quantities of water, the team says. Very cold liquid water flowed through rivers and lakes on the lower-lying areas, forming landscapes similar to those which can be found in Iceland or Alaska today.

“For example, there is a glacier on Iceland — known as Breiðamerkurjökull — which shows evident resemblance to what we see in Gale Crater, and we suppose that is very similar to those which covered Gale’s central mound in the past,” says Fairén.

He emphasizes that the current study “provides strong local support for the global ‘cold and wet’ model of the ancient Martian environment. This, he says, “explains both the geological traces of the presence of liquid water in the past, which cover the entire planet, together with the climatic models which have demonstrated that Mars was never a warm planet.”