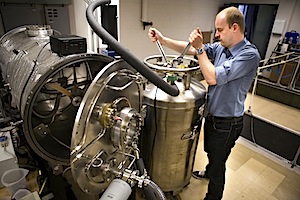 In chambers that mimic Mars’ conditions, researchers have shown how small amounts of liquid water could form on the planet despite its below-freezing temperatures. Mars is one of the very few places in the solar system where scientists have seen promising signs of it — in gullies down crater rims, in instrument readings, and in Phoenix spacecraft self portraits that appeared to show wet beads on the lander’s leg. No one has directly detected liquid water beyond Earth, though. Experiments at the University of Michigan found that a type of salt present in Martian soil can readily melt ice it touches… [More at link]