The northern lowlands of Mars have long invited the notion that in ancient times they once contained a now-vanished polar ocean. Yet a longstanding argument against such was the lack of widespread clay minerals that would naturally occur with such a large body of water. 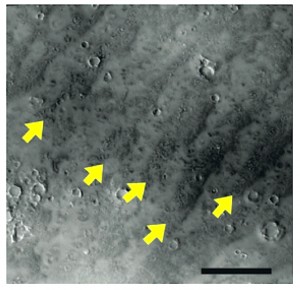 GLACIER MORAINES. Boulder-covered ridges (yellow arrows) left by glaciers lie in the lowlands near northwestern Arabia Terra, in this image from the HiRISE camera on the Mars Reconnaissance Orbiter. Glaciers filling valleys at the highlands-lowlands boundary would have blocked the flow of water carrying clay minerals into the northern lowlands. (Taken from Figure 2 in the paper.)

Clays, for example, are extremely common in ocean sediments on Earth, but are detected only rarely in the ancient basement rocks of the northern lowlands of Mars. At the same time, clay minerals appear at thousands of locations in the Martian highlands.

Alberto Fairén (SETI Institute and NASA Ames Research Center) and colleagues now say that this argument against a northern ocean is not as conclusive as thought.

Writing in Nature Geoscience, they say that any Martian polar ocean would be partially frozen over and have internal temperatures near freezing. Under these conditions, the researchers’ computer models show that clays would be unlikely to form.

In addition, they note the shores of a polar ocean would be choked with glacier ice producing little or no meltwater. This would prevent clay minerals that developed in the highlands from washing down into the northern ocean.

And what about the weathering effect of a northern ocean on basaltic rocks within the ocean basin? The researchers noted that any ocean would be partially ice-covered and the water would have near-freezing temperatures. This means that the chemical reactions producing clays by weathering basalt would either cease or run only very slowly.

“Our model results show that clays are a significant component at the beginning, but they become residual with time and the associated drop in temperature,” they explain. “A system containing basalt and water evolving towards subzero temperatures would finally preclude the formation of clays.”