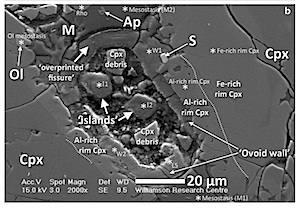 A new ovoid structure discovered in the Nakhla Martian meteorite is made of nanocrystalline iron-rich clay, contains a variety of minerals, and shows evidence of undergoing a past shock event from impact, with resulting melting of the permafrost and mixing of surface and subsurface fluids. The findings appear in a newly published paper in the journal Astrobiology. While the authors, Elias Chatzitheodoridis (National Technical University of Athens) and Sarah Haigh and Ian Lyon (University of Manchester, UK) do not believe the formation of this structure involved biological materials, that is a possible hypothesis, and they note that evidence exists supporting the presence of niche environments in the Martian subsurface that could support life…. [More at link]