Devilry in the air

With all the spacecraft orbiting Mars, it’s slightly surprising that there aren’t more observations of dust devils shared by two or more instruments. 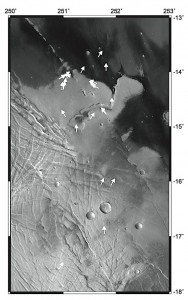 ON THE MOVE. White arrows indicate where dust devils were photographed nearly simultaneously in Syria-Claritas by the MOC-WA camera and HRSC. The arrows point in the direction the dust devils were moving. (Taken from Figure 4 in the paper.)

Writing in the September 2011 issue of Icarus, a team of scientists led by Dennis Reiss (Westfälische Wilhelms-Universität, Germany) describes 11 dust devils that were observed by coincidence on the same day (September 11, 2005) some 26 minutes apart by both the MOC-Wide Angle camera on Mars Global Surveyor and the High Resolution Stereo Camera on Mars Express. The region where they were seen is Syria Planum-Claritas Fossae, an area known for its bright dusty surface.

The near-simultaneous observations with two image channels of HRSC (about 1 minute apart) let the team measure the speed and direction of movement for
the whirlwinds. The local time on Mars was about 1:45 p.m. and the season was early southern summer.

Despite this, the scientists were able to track one big dust devil seen in the HRSC image back to the MOC-WA image, where it showed a ground track already in progress. “For the largest dust devil, about 820 meters [2,700 feet] in diameter, it was possible to calculate a minimum lifetime of around 74 minutes, based on the measured horizontal speed and the length of its associated track in the MOC image,” say the researchers.

Previous studies of Martian dust devils attempted to estimate how much dust they lift into the air, but the calculations are difficult. Working with data from dust devils in Gusev Crater by the Spirit rover, the team suggests that their biggest dust devil (noted above) — roughly 1,500 meters (4,900 ft) tall and moving 10 meters/sec (22 miles/hr) — was carrying about 235 kilograms (520 pounds) of dust in suspension.

In regions with a lot of dust to pick up, the scientists say, big dust devils probably contribute most of the dustiness in the air, even though smaller dust devils are far more numerous.

They explain, “Large dust devils are able to lift dust to much higher atmospheric layers — greater than a kilometer — which causes much longer retention times in the atmosphere due to the slower dust settling rates.”

However, they add, “We also note that our estimates have several uncertainties due to rare observations and measurements of large dust devils on Earth and Mars.”