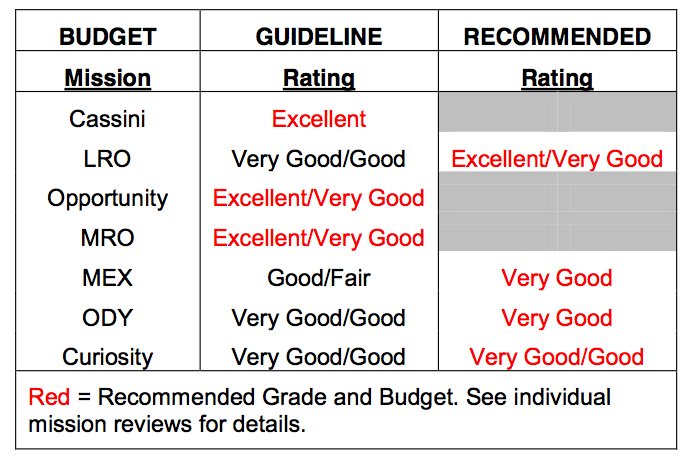 The results of the 2014 Senior Review of ongoing major missions by NASA are given above. The table and the comments below are taken from the Senior Review Report (PDF), available at the website of the Planetary Science Subcommittee of the NASA Advisory Council (NAC). A set of overview slides is available in PDF format as well.

Opportunity:  “…The Mars Exploration Rover (MER) Opportunity continues to make important scientific discoveries on the surface of Mars. In the latest extended mission it proposes to determine the aqueous, environmental, and geologic conditions that constrain past and present habitability, as well as examine present climate variability. This will be achieved by measurements of rocks and soils as well as atmospheric observations as it traverses from Murray Ridge to Cape Tribulation. This extended mission will focus on the orbitally detected phyllosilicate deposits near Endeavour crater, which are considered to represent deposits from the ancient Noachian period. This would represent the first time that such ancient deposits have been analyzed on the Martian surface….”

Mars Express (MEX): “…US participation in Mars Express is dominated by involvement with the Mars Advanced Radar for Subsurface and Ionospheric Sounding (MARSIS) and the Analyzer of Space Plasmas and Energetic Atoms (ASPERA) neutral and charged particle instrument….  A major weakness of this extended mission was the fact that the HRSC image calibration and validation tasks were not justified, and the team could not quantify how much better the camera alignment or geometric information will become with the proposed tasks, nor how much image quality would improve or specifically what new science could now be achieved as a result. In addition, the HRSC data have been used in only four publications in the last two years. Finally, the availability of MEX data in the PDS/PSA for all four instruments (including OMEGA) remains intermittent…”

Mars Odyssey: “…The sixth extended mission (EM6) of ODY will move the spacecraft into a new orbit so the instruments can view the terminator. This will allow EM6 to achieve four scientific objectives: 1) Provide an understanding of the distribution of water, carbon dioxide and dust in the atmosphere and how they interact with the surface; 2) Generate a global picture of the Martian surface mineralogy, geomorphology, and thermophysical properties; 3) Provide an understanding of the Martian radiation environment and its variability as a function of time; and 4) Serve as an observatory for monitoring cosmic gamma ray bursts… Neither the proposal nor the presentation made convincing arguments as to how substantial new science that directly relates to Planetary Science Division objectives as outlined in the Decadal Survey would be possible from all instruments during EM6…. The panel re-voted the ODY EM6 proposal on the basis of descoping the total GRS suite, as it is conducting science observations to address objectives peripheral to planetary science. The adjectival grade improved to Very Good (Table 1), but ODY may be coming to the end of its life as a productive science mission, as highlighted by the declining rate of publications using ODY data over the last three years… The panel did note that JMARS is a valuable tool for the Martian planetary community, as well as the general public… It would be detrimental to science productivity if the community were to lose this resource due to a lack of funding because JMARS supports multiple data sets…”

Curiosity: “…The proposal and presentation given to the Senior Review panel described the first extended mission (EM1) of Curiosity. During EM1, Curiosity will traverse about 8 km, visit four different units that presumably represent different climatic stages in the history of Mars, and conduct a total of eight detailed analyses (two from each unit) using the instrument suite on the rover. This will be accomplished as it traverses the foothills of Aeolis Mons or “Mount Sharp” within Gale crater… The panel strongly urges NASA HQ to get the Curiosity team focused on maximizing high-quality science that justifies the capabilities of and capital investment in Curiosity. Given that Mars 2020 will be built on Curiosity heritage, maximizing the science return from Curiosity would go a long way to a smooth development of the next US Mars rover mission…. As Curiosity is a flagship mission, the panel was surprised by the lack of science in the EM1 proposal…  In summary, the Curiosity EM1 proposal lacked scientific focus and detail. The recommendation of the Senior Review panel is a descope in the traverse distance as EM1 would better serve science by focusing on the Paintbrush, Hematite, and possibly the Clay units and doing a better job of characterizing these, than focusing on the upper layers in EM2….”