Making fans all over

Water and sediment run downhill, on Earth and Mars alike. And when they do, they build broad alluvial (outwash) fans at the foot of slopes. But how fast do these fans accumulate? On Mars, at least, it looks like they grow very slowly indeed, probably over tens to hundreds of millions of years. 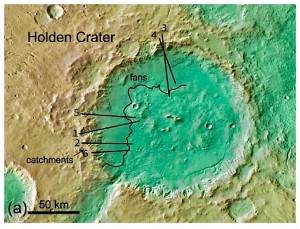 OUTWASH. By modeling how fast the alluvial fans in craters (such as Holden) can form, scientists can put boundaries on past Martian climates. These models point toward either a brief "humid pulse" of erosion - or timescales measured in tens to hundreds of million of years. (Image taken from Figure 3 in the paper.)

Studying dozens of sedimentary fans within ancient craters, a group of geologists led by John J. Armitage and Nicholas H. Warner (Imperial College London) describe in Geophysical Research Letters (September 9, 2011) their models for creating fans on Mars using water runoff from rain and melting snowfall. “Our objective,” they explain, “is to constrain likely scenarios for making large, low-gradient fans under different conditions of precipitation and time.”

What they found is that the amount of rainfall (or equivalent snowmelt) typical of arid climates on Earth needs million-year timescales at least to make a large alluvial fan on Mars. Under hyperarid climates (meaning roughly millimeter or so of rain per year), it takes 100 million years or more to develop a Martian fan.

And turning the problem around to focus on precipitation, they find that to do the job in only a million years, Mars wouild need a rainfall equivalent to a temperature climate on Earth, with more than 20 centimeters (or 8 inches) a year.

These timescales, they note in passing, are in “stark disagreement” with earlier models of alluvial fan development.

Looking at Holden Crater, whose interior contains several merged fans — including a candidate landing site for Mars Science Laboratory — the scientists’ model suggests that under semiarid conditions, it would take 1 to 3 million years to form; under more arid conditions, the necessary time grows sharply to 20 to 60 million years.

Finally, the team suggests that Martian alluvial fans imply either a “humid pulse” of weathering that lasted roughly a million years, or that Mars experienced a persistent arid climate that extended 10 million to 100 million years.