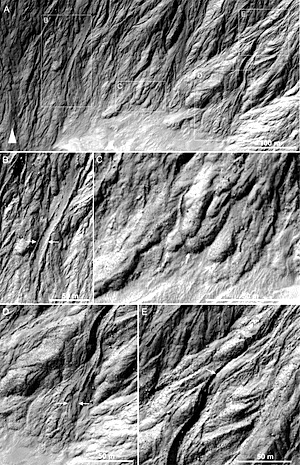 The question whether Martian gullies formed by fluvial processes or by dry mass wasting have been a source of heated debate ever since their discovery (Malin and Edgett, 2000). Intense research within the last decade however points to a fluvial origin for a majority of gully landforms on Mars. This is supported by Earth-analog studies (e.g., Reiss et al., 2011), modelling and morphology (e.g., Mangold et al., 2010) and their regional context (e.g., Balme et al. 2006; Kneissl et al. 2010). Recently Dickson et al. (2009) suggested that gullies are due to degradation of a dust-ice mantle which drapes the underlying bedrock. The latitude-dependent dust-ice mantle… [More at link]

This entry was posted in Reports and tagged debris flows, geomorphology, mass wasting. Bookmark the permalink.