Many rocks on the surface of Mars show pits and small holes. One way such pits can form is when gas-rich lava erupts; the pits, called “vesicles,” form when gas escapes from the lava as it’s cooling. Wind-driven sand can also dig pits and flutes in rocks, as can the removal of individual mineral crystals, and salt crystals can also force open holes in rocks as they grow. 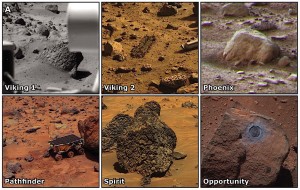 WHAT MADE THESE PITS? According to a new paper, weathering can occur on Mars when frost or snow collects in surface rough spots, melts, and then attacks the rock's minerals. (Image is Figure 1a from the paper.)

A group of planetary geologists led by James Head (Brown University) report on the Martian applicability of a different pit-making method: weathering by melting snow.

Writing in the Journal of Geophysical Research (September 17, 2011), they say that igneous rocks in the Antarctic Dry Valleys – the place on Earth most like Mars – form pits where snow collects. Warmed by sunlight, the snow melts, becoming liquid for a short time during which the water can chemically attack the rock and deepen the pit.

How does this model apply to Mars? The scientists say that for this kind of weathering to occur on Mars, (1) atmospheric pressure has to be high enough (612 pascals) to permit liquid water (at least briefly), (2) rock surface temperatures have to rise above 0° C (32° F), and (3) there has to be snow or frost available for melting.

Taking these requirements one by one, they say that Mars currently has an atmospheric pressure above 612 Pa at each of the six landing sites (Vikings 1 and 2, Mars Pathfinder, Mars Phoenix, and both Mars Exploration Rovers) during at least part of the year. In the past, they explain, the atmosphere was likely thicker.

Mars soils, they note, definitely become hotter than 0° C in many places, but heating rocks is harder. Nonetheless, during seasons when Mars is near perihelion (closest to the Sun), sunlit rock faces often heat up 2° to 5° C warmer than freezing.

Finally, the researchers say that frost and snow are quite rare, but occur in small amounts at high latitudes. Snow, they note, was seen falling from clouds by the Phoenix lander, although it did not reach the ground. But if conditions became only slightly more favorable, they say, frost or snow might be a source of water by accumulating in pits and surface irregularities on rocks.

“We find that on Mars today,” the researchers write, “each of the conditions required for melting snow and ice on rock surfaces are met locally and regionally, but the conditions are very unlikely to occur together to produce the type of melting that forms pits in the Antarctic Dry Valley environment.”

However, they conclude, “the combination of conditions favoring this process are highly likely to have been met repeatedly in the geological past.”