More dust devilry in the air

Dust devils are the most dynamic feature on Mars, and scientists are zeroing in on how they work. An earlier Red Planet Report described dust devil motions as mapped by fortuitous simultaneous observations by cameras on two separate spacecraft. 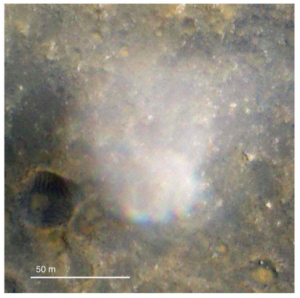 COLOR EQUALS MOVEMENT. After combining frames into a color composite image, a moving dust cloud produces rainbow fringes towards the bottom of this dust devil, as caught in HiRISE frame ESP_021925_1650. (Image is Figure 2 from the paper.)

“The central color swath of the HiRISE instrument has three separate CCD sensors and color filters,” they note. “These observe the surface in rapid cadence, about a tenth of a second apart.”

This makes active features, such as dust devils or avalanches, appear to move like a flip movie when the individual images are animated. Choi and Dundas note that they can track the movement of details in dust devil clouds to get horizontal wind measurements.

“Typically, the strongest winds occur along the outer edge of a dust devil, regardless of its diameter,” they report. These figures are in general agreement with previous observations made from orbit and from the Martian surface.

Choi and Dundas also report that the cores of the dust devils show a slightly reduced air pressure (about 1 percent), which they note is enough to lift dust from the surface and help it become caught up in the whirlwind.