One of the unusual features that Mars Exploration Rover Spirit discovered at Home Plate, a former hydrothermal vent in the Columbia Hills, was a “bomb sag,” complete with its partially embedded volcanic bomb. To geologists, volcanic bombs are rocks or debris tossed in the air by eruptions, and a bomb sag is the crater that forms when a bomb hits the ground. 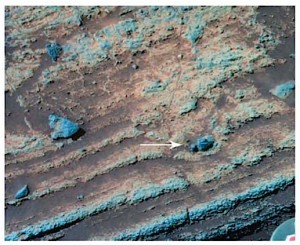 IT HIT WET GROUND. A small rock (arrow), about 1.5 inches wide, was thrown into the air by a volcanic explosion near Home Plate in the Columbia Hills. When this "volcanic bomb" landed on layered sediments, it made a tiny crater less than an inch deep. Experiments with similarly sized projectiles led the researchers to conclude the sediments were soaking wet when the rock landed. (Image is Figure 1a from the paper.)

Michael Manga (University of California, Berkeley) led a team of scientists who used the bomb sag to investigate conditions at Home Plate when it formed. Specifically, they wanted to know how dense the atmosphere was when the bomb landed and how saturated the sediments were. The report on their lab experiments appears in Geophysical Research Letters.

“To create laboratory bomb sags, we propelled centimeter-sized particles with compressed air towards layered beds of sand-sized particles,” they write. Some sand beds they kept dry, others were damp, still others were thoroughly wet. The best fit they found was with water-saturated sand, implying the same for Home Plate.

The team then calculated likely atmospheric densities, starting with some assumptions about the rock’s mass, volcanic source, and impact velocity. While acknowledging the uncertainties, Manga’s team concluded that the minimum atmospheric density at the time of impact was about 20 times higher than the Martian atmosphere currently has.

The researchers caution that this is just a single observation made at a site whose age is known only poorly.