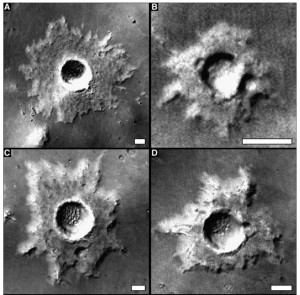 MINI-PEDESTAL CRATERS formed when small meteorites struck an ice-rich deposit in Daedalia Planum. They lie at a latitude where scientists have thought ice deposits were not present in Mars' recent geologic history. The white scale bars in each image are 10 meters (33 feet) long. (The image is from Figure 3 in the paper.)

Craters surrounded by debris aprons that stand above the surrounding surface are known as pedestal craters. Scientists think the slab-like apron of ejecta around such craters covers layers that are rich in water ice. Nearly all pedestal craters found so far have been in middle to high latitudes, where scientists know ice exists at shallow depths

Now a group of small, young pedestal craters has been identified in images from the HiRISE camera on NASA’s Mars Reconnaissance Orbiter. These craters lie in the Martian tropics, where scientists have thought annual warmth would have long since removed any shallow ice.

Samuel Schon and James Head (Brown University both) report in the February 2012 Earth and Planetary Science Letters on a population of pedestal craters with diameters of a few tens of meters (hundreds of feet) in Daedalia Planum at 23° south latitude.

The craters formed by impacts into an ice-rich deposit that formed on top of the ejecta apron around a larger crater (5.3 kilometers or 3.3 miles) across. This crater is only 12 to 13 million years old. The researchers envision that the small impacts dug through the ice-rich deposit into the underlying material. The outflung debris from the small impacts preserved a portion of the ice-rich deposit under their own ejecta blankets. The result was a handful of mini-pedestal craters matching in form those seen elsewhere at higher latitude, but much smaller in size.

Regarding when in the last 12 million years the pedestal craters formed, the scientists can’t say for sure, but they offer some possible answers. “The pedestal craters could have formed during the most recent Martian ice age, dated to 400,000 to 2.1 million years ago. However, we suggest that formation is more likely to have occurred during a period of higher mean obliquity before 5 million years ago, during which time the Martian axis often approached 45° obliquity. These older more extreme obliquity conditions are consistent with global climate modeling for equatorial ice deposits.”

If the interpretation is right, say the authors, “these small pedestal craters formed when a meters-thick layer of ice was present in the tropics of Mars in the last few million years.”