Mars has mid-latitude belts of glaciers 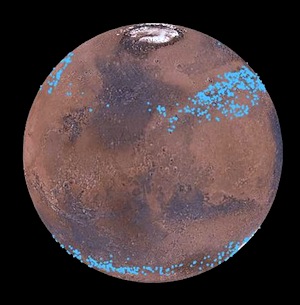 Mars has distinct polar ice caps, but Mars also has belts of glaciers at its central latitudes in both the southern and northern hemispheres. A thick layer of dust covers the glaciers, so they appear as the surface of the ground, but radar measurements show that underneath the dust there are glaciers composed of frozen water. New studies have now calculated the size of the glaciers and thus the amount of water in the glaciers. It is the equivalent of all of Mars being covered by more than one meter of ice. The results are published in the scientific journal, Geophysical Research Letters. [...]

Using radar measurements from the NASA satellite, Mars Reconnaissance Orbiter, researchers have been able to determine that is water ice. But how thick was the ice and do they resemble glaciers on Earth? A group of researchers at the Niels Bohr Institute have now calculated this using radar observations combined with ice flow modelling… [More at links]