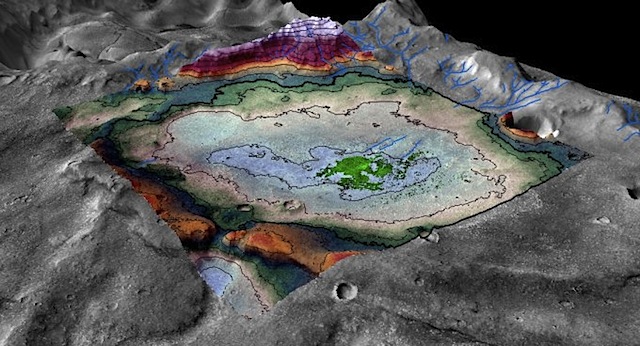 Mars turned cold and dry long ago, but researchers at the University of Colorado Boulder have discovered evidence of an ancient lake that likely represents some of the last potentially habitable surface water ever to exist on the Red Planet.

The study, published Thursday in the journal Geology, examined an 18-square-mile chloride salt deposit (roughly the size of the city of Boulder) in the planet’s Meridiani region near the Mars Opportunity rover’s landing site. As seen on Earth in locations such as Utah’s Bonneville Salt Flats, large-scale salt deposits are considered to be evidence of evaporated bodies of water.

Digital terrain mapping and mineralogical analysis of the features surrounding the deposit indicate that this one-time lakebed is no older than 3.6 billion years old, well after the time period when Mars is thought to have been warm enough to sustain large amounts of surface water planet-wide. Planetary scientists believe that the solar system formed approximately 4.6 billion years ago.

“This was a long-lived lake, and we were able to put a very good time boundary on its maximum age,” said Brian Hynek, a research associate at the Laboratory for Atmospheric and Space Physics (LASP) at CU-Boulder and lead author of the study. “We can be pretty certain that this is one of the last instances of a sizeable lake on Mars.” [More at links]

This entry was posted in Reports and tagged chlorides, salts. Bookmark the permalink.