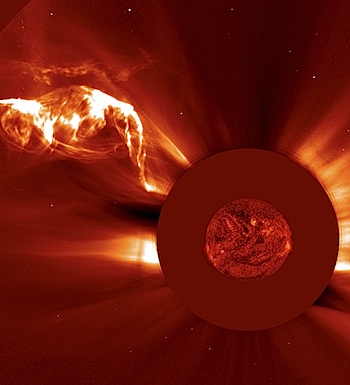 On Aug. 7, 1972, in the heart of the Apollo era, an enormous solar flare exploded from the sun’s atmosphere. Along with a gigantic burst of light in nearly all wavelengths, this event accelerated a wave of energetic particles. Mostly protons, with a few electrons and heavier elements mixed in, this wash of quick-moving particles would have been dangerous to anyone outside Earth’s protective magnetic bubble. Luckily, the Apollo 16 crew had returned to Earth just five months earlier, narrowly escaping this powerful event. [...]

“The Martian” film highlights the radiation dangers that could occur on a round trip to Mars. While the mission in the film is fictional, NASA has already started working on the technology to enable an actual trip to Mars in the 2030s. In the film, the astronauts’ habitat on Mars shields them from radiation, and indeed, radiation shielding will be a crucial technology for the voyage. From better shielding to advanced biomedical countermeasures, NASA currently studies how to protect astronauts and electronics from radiation – efforts that will have to be incorporated into every aspect of Mars mission planning, from spacecraft and habitat design to spacewalk protocols. [More at link]