When Gale was young

With Mars rover Curiosity safely down on Mars, scientists are set to explore the geology and history of Gale Crater, searching for evidence of habitable environments, ancient or modern. 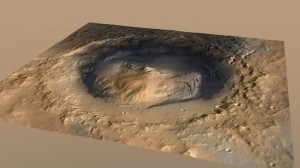 RIM, MOAT, MOUND. Gale Crater, seen in a composite image that looks toward the southeast, was a big enough impact to have had a vigorous hydrothermal system. During the few hundred thousand years this probably lasted, it might have offered refuges for some forms of primitive life. Image credit: NASA/JPL-Caltech/ESA/DLR/FU Berlin/MSSS.

Gale Crater has attracted much study since it became a candidate landing site for Curiosity. A new paper in Planetary and Space Science by Susanne Schwenzer (Lunar and Planetary Institute) and a team of scientists looks at a relatively unexamined part of the Gale story. This is its formation by impact, and the role of water, especially groundwater heated by the impact, during its earliest history.

The impact that blasted the 155-km (96-mile) crater came late in the Noachian period, the oldest in Martian geohistory, roughly 3.5 billion years ago. The Schwenzer team calculates that the initial cavity caused by the impact was 90 km (56 mi) in diameter and it would have dug 10 to 15 km (6 to 9 miles) deep into Mars. As uplifted wall materials collapsed and subsided, the cavity widened to reach its final size, about 150 km (96 mi) wide. In the crater center, the floor rebounded and thrust up a central peak, which today lies buried within the mound, dubbed Mt. Sharp.

“The mound is clearly an erosional remnant of a more extensive sediment pile,” the team writes. “Its original extent is not clear, but may have entirely filled Gale.”

Debris ejected in the impact landed on older Noachian craters in Gale’s vicinity, such as Lasswitz and Wein to the south. Close to the crater, the scientists estimate the blanket of ejected debris was about 600 meters (2,000 feet) thick.

The heat of impact would have produced a large volume of molten rock, with about half of it being retained inside the crater. The zone of melting likely reached 17 to 30 km (11 to 19 miles) deep. The impact melt that remained, they calculate, had a volume of at least 1,800 cubic km (430 cubic mi) and formed a sheet of molten rock that ringed the central peak like a moat.

The scientists note, “Impact-deposited heat at Gale, concentrated in the melt-sheet and central uplift, would have been capable of generating intense hydrothermal activity.” In Gale-size craters, they explain, “Rocks in and near the central peak would be heated to about 1,500° C [2,700° F], with temperatures declining away from the center.”

Provided water is present, they say, “this heat will produce a hydrothermal convection system in which groundwater would be drawn toward the central peak, channelled by fractures, and discharged as hot water or steam.”

If water were unable to penetrate the hot melt sheet, it would be concentrated in the central peak and the crater-rim areas where fractures would offer pathways to the surface. “Much of this discharge would end up in the crater’s moat, forming a crater lake, before evaporating or infiltrating back into the ground.”

The hydrothermal system could be active for roughly 300,000 years, they say.

The team then examines the way minerals will be altered by the hot water, and the way the hydrothermal systems will evolves. “Mars’ climate changed to cold and dry conditions around the time Gale Crater formed,” they note. “This makes impact sites important places for survival, if life had existed at that time.”

Moreover, the scientists add, “Impact-generated hydrothermal systems are likely to have provided refugia of liquid water in a progressively icy environment.” These would offer a broad range of long-lived aqueous and thermal environments, potentially linked by deep aquifers and evolving slowly with time.

One Response to When Gale was young