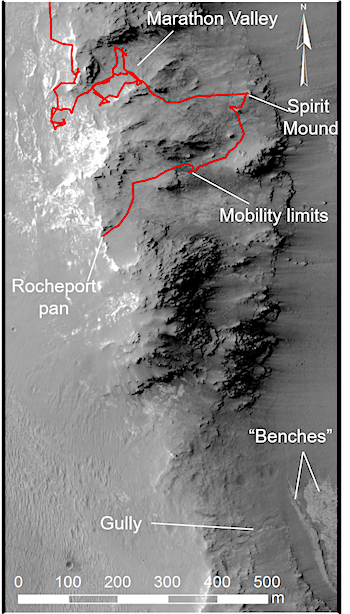 March 3, 2017: Opportunity reaches top of Endeavour Rim, wraps Cape Tribulation: Driving the Mars Exploration Rovers (MER) mission further into its fourteenth year of surface operations, Opportunity continued hiking the slopes of Cape Tribulation in February and finally reached the crest of Endeavour Crater’s western rim. There, the robot field geologist looked around with her Panoramic Camera ‘eyes,’ took dozens of pictures of her view, and was about to hit the road – until the scientists saw something too intriguing to pass up in the images the rover was sending home.

“It’s kind of an important time for Opportunity,” said MER Deputy Principal Investigator Ray Arvidson, of Washington University St. Louis (WUSTL) during the final days of the month. “This is it for Cape Tribulation and so we stopped short of going over the crest to acquire a good, parting shot.”

But in the images the MER scientists saw an outcrop of finely striated bedrock that looks like it had been etched or carved by something. So they decided to have Opportunity also conduct one last scientific campaign before departing. “We were about to exit the ‘door,’ but suddenly we discovered this ‘door’ is pretty exciting,” said MER Project Manager John Callas, of the Jet Propulsion Laboratory (JPL), the birthplace of all NASA’s Mars rovers.

The outcrop is more of the same breccia bedrock that formed during the impact that created the 22-kilometer (about 13.7-mile) diameter Endeavour, which the team calls Shoemaker Formation. Opportunity has been roving on and around this breccia since pulling up to the crater’s western rim in August 2011. “But we realized it would be our last full science campaign in Cape Tribulation and of Shoemaker breccia, maybe forever,” said Arvidson. More than that, this sample of Shoemaker is so visually distinctive the scientists were compelled to command the rover to take a closer look.  [More at link]