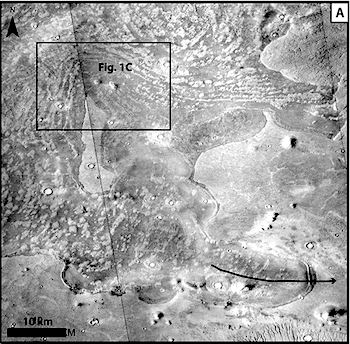 Thirty years ago, during a 3-month long visit to the U.S. Geological Survey in Arizona, Francois Costard saw Viking orbiter images of Mars’s northern plains showing strange curving features along the boundary between the Martian northern and southern hemispheres.

Costard, a student in planetary science, thought these features and the deposits along them looked strange and wondered how they came to be.

“It was very curious and it was, for me, very impossible to interpret these landforms,” he said. Three decades later, and now a scientist at CNRS in France, Costard shows how those strange landforms could be the remains of huge tsunamis.

A study published last year [see here and here] interpreted images of the red planet and suggested the deposits were made by impact-generated tsunamis more than 3 billion years ago.

In a new study [published in the Journal of Geophysical Research], Costard and his colleagues independently build on that work by including the geological characteristics of the deposits and modeling how impact-generated tsunamis could have created them. They conclude the deposits may have come from asteroids slamming into a northern ocean billions of years ago, generating waves 300 meters (nearly 1,000 feet) high.

The researchers also used detailed geological maps to show how these waves could be responsible for creating the so-called Thumbprint Terrain, a mysterious type of patterned ground resembling the lines on a human thumbprint.

“The only way to explain it is the tsunami hypothesis,” said Costard. [More at links]

This entry was posted in Reports and tagged Oceanus Borealis, thumbprint terrain, tsunamis. Bookmark the permalink.