Mars’ oceans formed early, with a possible assist from volcanism 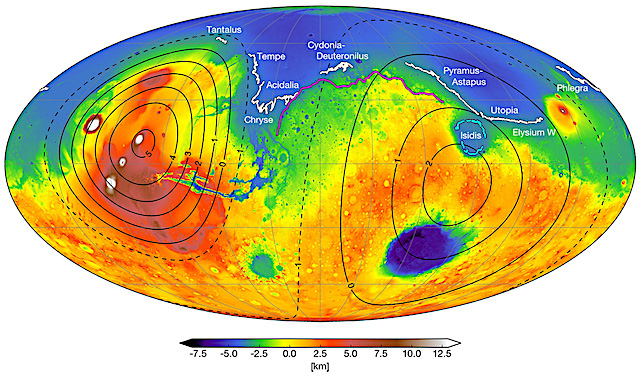 A new scenario seeking to explain how Mars’ putative oceans came and went over the last 4 billion years implies that the oceans formed several hundred million years earlier and were not as deep as once thought.

The proposal [published in Nature] by UC Berkeley geophysicists links the existence of oceans early in Mars history to the rise of the solar system’s largest volcanic system, Tharsis, and highlights the key role played by global warming in allowing liquid water to exist on Mars.

“Volcanoes may be important in creating the conditions for Mars to be wet,” said Michael Manga, a UC Berkeley professor of earth and planetary science and senior author of a paper appearing in Nature this week and posted online March 19.

Those claiming that Mars never had oceans of liquid water often point to the fact that estimates of the size of the oceans don’t jibe with estimates of how much water could be hidden today as permafrost underground and how much could have escaped into space. These are the main options, given that the polar ice caps don’t contain enough water to fill an ocean.

The new model proposes that the oceans formed before or at the same time as Mars’ largest volcanic feature, Tharsis, instead of after Tharsis formed 3.7 billion years ago. Because Tharsis was smaller at that time, it did not distort the planet as much as it did later, in particular the plains that cover most of the northern hemisphere and are the presumed ancient seabed. The absence of crustal deformation from Tharsis means the seas would have been shallower, holding about half the water of earlier estimates. [More at links]