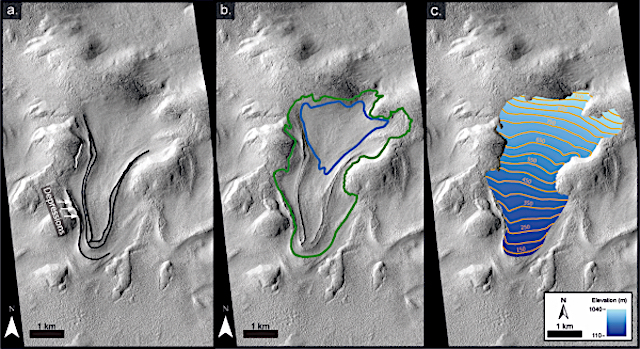 Much like their terrestrial counterparts, many of these glaciers have undergone mass loss and recession since a former glacial maximum stand (e.g. Kargel et al., 1995; Dickson et al, 2008) (Image 1). However, there is a lack of knowledge regarding the volume of ice lost since that time and whether such recession has been spatially variable.

Reconstructing glacial environments based on their landforms and structural assemblage is a powerful concept applied in terrestrial glaciology. Through utilising evidence left on the landscape with observations from modern glaciers, it is possible to reconstruct the extent and dynamics of both former (glaciated) and modern (glacierised) glacial environments (see Bennett and Glasser, 2009).

This month’s planetary geomorphology post investigates how similar techniques have been utilised to reconstruct the former extent of glaciers on our planetary neighbour, Mars… [More at link]

This entry was posted in Reports and tagged glaciers, mid-latitude glaciers. Bookmark the permalink.