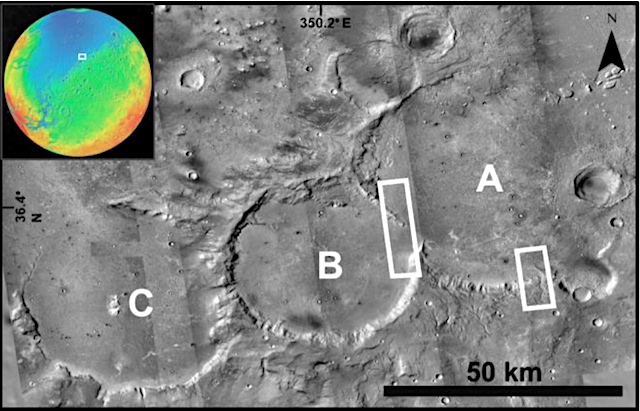 [Editor’s note: From a paper by Steven Sholes and two co-authors recently published in the Journal of Geophysical Research.]

• We apply a proposed paleoshoreline identification toolkit to newer high resolution data of an exemplar site for paleoshorelines on Mars.
• Any wave-generated paleoshorelines should exhibit expressions identifiable in the residual topography from an idealized slope.
• Our analysis of these curvilinear features does not support a paleoshoreline
interpretation, and is more consistent with eroded lithologies.

There is an ongoing controversy about whether Mars had ancient oceans. Abundant evidence for past surface liquid water exists but it is debated how much and for how long it persisted on Mars’ surface.

Features have previously been traced out in relatively low‐resolution images and interpreted as shorelines of episodic ancient oceans. However, new high‐resolution data allows for better and more complete analyses. Here, we present methods to determine whether any proposed ancient shoreline feature meets the requirements to be classified as a shoreline using these improved data.

Shorelines should form flat “step‐like” landforms at a near‐constant elevation, so one critical analysis looks at the shape and elevation of proposed features. We examine a site that has been promoted in the literature as an exemplar of ancient shorelines and find that this site lacks a diagnostic shoreline shape. Instead features at this site are better explained as exposed and eroded rock layers that mimic shoreline shapes in low‐resolution images.

This entry was posted in Reports and tagged Cydonia Mensae, oceans, shorelines. Bookmark the permalink.