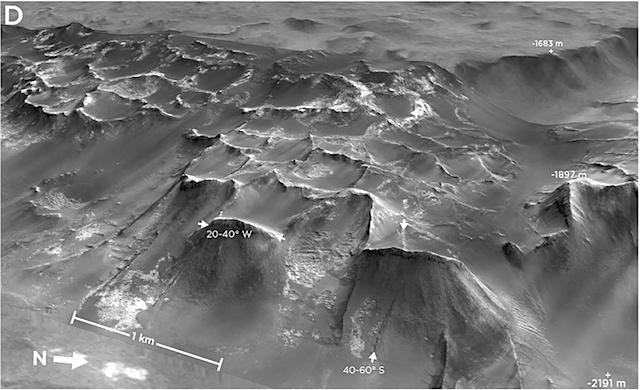 [Editor’s note: From a paper by Daven Quinn and Bethany Ehlmann recently published in the Journal of Geophysical Research.]

The layered sulfates—uniquely exposed at northeast Syrtis Major—comprise a sedimentary sequence up to 600 m thick that has undergone a multistage history of deposition, alteration, and erosion. Siliciclastic sediments enriched in polyhydrated sulfates are bedded at meter scale and were deposited on slopes up to 10°, embaying and thinning against preexisting Noachian highlands around the Isidis Basin rim.

The layered sulfates were modified by volume loss fracturing during diagenesis. Resultant fractures hosted channelized flow and jarosite mineral precipitation to form resistant ridges upon erosion. The structural form of the layered sulfates is consistent with packages of sediment fallen from either atmospheric or aqueous suspension; coupling with substantial diagenetic volume loss may favor deepwater basin sedimentation.

After formation, the layered sulfates were capped by a “smooth capping unit” and then eroded to form paleovalleys. Hesperian Syrtis Major lavas were channelized by this paleotopography, capping it in some places and filling it in others. Later fluvial features and phyllosilicate‐bearing lacustrine deposits, sharing a regional base level of ∼−2,300 m, were superimposed on the sulfate‐lava stratigraphy.