About that mound in Gale Crater…

Next August, if plans go right, the Mars Science Laboratory rover, named Curiosity, will come sailing out of the Martian sky and power in for a soft landing on the floor of Gale Crater. Launched to look for geologic evidence of habitable enviroments, what will Curiosity find? 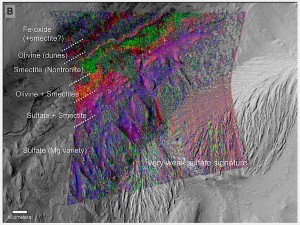 GLOBAL SHIFT. A change in weathering chamistry is reflected as the lower layers of sediment in Gale's mound were overlain by later ones. The former are rich in water-altered clays such as smectite, while latter layers contain sulfates that formed in a more acidic environment. Project scientists and engineers expect that Curiosity will be able to explore the layers in this canyon scene. (Image taken from figure 10B in the paper.)

NASA picked Gale in part because the northern half of its floor appears as safe a landing zone as the Gusev plains where MER Spirit set down in 2004. However, the main reason for choosing Gale is the giant mound of sediments filling a large part of the crater. It rises 5,200 meters (17,000 feet) and spreads 45 by 90 km (28 by 56 mi).

B. J. Thomson (Boston University) and nine colleagues examine the mound’s age, history, structure, and composition in a newly published paper in the August 2011 issue of Icarus.

The team used data from CRISM, HiRISE, THEMIS, and other instruments to draw a portrait of the mound, identifying 22 individual geologic units grouped into two major formations. They note the lower and older formation displays “abundant evidence for aqueous activity,” a key virtue for Curiosity’s mission.

Spectroscopic data show the lower layers contain clays mixed with a few sulfates. Toward the top of the lower formation and continuing into the upper formation, the layers change into sulfate-bearing strata. The researchers say the changeover may reflect a global shift from a warmer and chemically neutral weathering environment to a colder and more acidic one.

The boundary between the two formations marks a gap in geologic history of unknown length. By counting craters, the team finds that Gale Crater formed at the end of the Noachian era, or about 3.8 billion years ago. The mound cannot be any older than that.

At the other end of the date range, the mound’s youngest surfaces appear roughly 2.8 billion years old. But the scientists caution that its materials erode easily and don’t retain craters for age-dating very well, thus the mound is in fact older than it looks. (Think geological botox.)

Whatever the mound’s exact age, however, it will be a striking site for Curiosity to visit. Moreover, says the team, “Gale provides a unique opportunity to investigate global environmental change during a period of transition.”