Down in the deltas

Although NASA passed over Eberswalde Crater to choose Gale Crater as the landing site for the Mars Science Laboratory (MSL), Eberswalde offers the best known example on Mars of a river delta built from sediment washed into a crater lake. 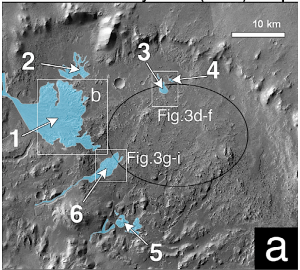 DELTAS SIX. While the large delta (1) in Eberswalde Crater is well known, researchers have identified at least five more deltas within the crater's western half. The black oval marks MSL's intended landing area. (Image taken from Figure 2a in the paper.)

A new study published August 27 in Geophysical Research Letters says that Eberswalde has not just the one known and well-studied delta, but at least five more located within the crater’s western half. The researchers, led by Melissa Rice (Cornell University), say that all six deltas share what appears to be the same sequence of three sedimentary beds.

In addition, the team identifies and traces fault lines and scarps trending north-northeast through the crater. These, they say, affected the large-scale structure of Eberswalde Crater, dividing it by means of a central high ground, which is flanked by faults, into eastern and western basins. The team also argues that these structures played a role in controlling how the deltas were built.

The researchers trace the faults all across Eberswalde, including the rim, so they believe the faulting came after the Eberswalde-making impact. Its source isn’t clear, but the team notes that the faults lie radial to the giant volcanic province of Tharsis. The stresses associated with building that enormous stack of lava might have produced faulting in the Eberswalde area, just as it did elsewhere.

The sedimentary sequence found in each of the deltas, identified using the HiRISE camera on Mars Reconnaissance Orbiter, has a layered unit on top, a fractured unit below that, and a pitted unit on the bottom. Between the fractured and pitted units is an erosional gap of unknown duration.

The researchers interpret the layered and fractured units as sediments produced by streams flowing into the Eberswalde lake, while the pitted unit is probably an ancient eroded surface, a sheet of impact melt, or debris ejected by the impact making nearby Holden Crater.