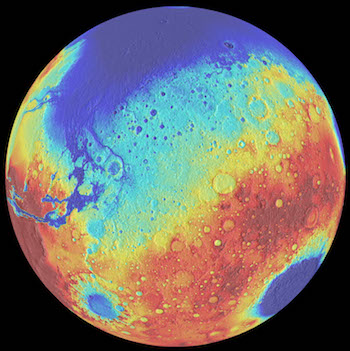 From the earliest days of our solar system’s history, collisions between astronomical objects have shaped the planets and changed the course of their evolution. Studying the early bombardment history of Mars, scientists at Southwest Research Institute (SwRI) and the University of Arizona have discovered a 400-million-year lull in large impacts early in Martian history.

This discovery is published in the latest issue of Nature Geoscience in a paper titled, “A post-accretionary lull in large impacts on early Mars.” SwRI’s Dr. Bill Bottke, who serves as principal investigator of the Institute for the Science of Exploration Targets (ISET) within NASA’s Solar System Exploration Research Virtual Institute (SSERVI), is the lead author of the paper. Dr. Jeff Andrews-Hanna, from the Lunar and Planetary Laboratory in the University of Arizona, is the paper’s coauthor.

“The new results reveal that Mars’ impact history closely parallels the bombardment histories we’ve inferred for the Moon, the asteroid belt, and the planet Mercury,” Bottke said. “We refer to the period for the later impacts as the ‘Late Heavy Bombardment.’ The new results add credence to this somewhat controversial theory. However, the lull itself is an important period in the evolution of Mars and other planets. We like to refer to this lull as the ‘doldrums.’” [More at links]