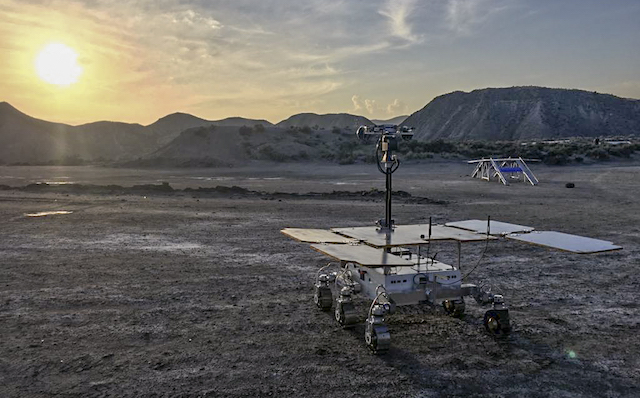 The sun set on a week of trials for the ExoMars rover prototype named Charlie (in the foreground). The first of two field trials for the mission, known as ExoFiT, took place in the Tabernas desert in Spain between 13-26 October.

While Charlie was located in Spain, mission operators and instrument scientists were based over 1000 km away at mission control in Harwell, UK, near ESA’s ECSAT centre where ExoFit was managed. The distance was crucial as teams operating a rover on the Martian surface must contend with infrequent communication possibilities and must run science operations with what little information they have. The rover itself is designed to carry out activities such as a traverse or observations in between communication blackouts as well as send data to Earth in preparation for the next martian day.

During the 10-day trial, the team practised driving the rover off its landing platform (in the background of this image), targeting sites of interest, and sampling rocks. Decisions were made based on data transmitted by the rover together with maps of the terrain.

Naturally, the team encountered technical difficulties, to be expected in real test conditions. Rainfall disrupted events and forced the team to adapt and optimise their time. In the second week, the team managed to finish activities scheduled for two martian days in a single day… [More at link]